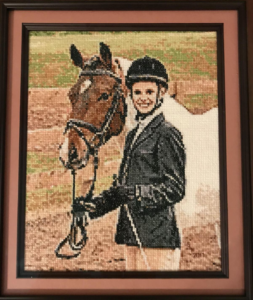 Counted cross stitch anchors the end of the first full year of the North Hall Gallery. “A Stitch for All Time” celebrates the glorious art form of counted cross stitch and needlework of church member Sue Hankins. Cross stitch is the oldest form of hand embroidery, dating back to the Middle Ages, and is found all over the world.

The history of the sampler in the United States dates back to the earliest days of the colonies. Prior to that, samplers appeared in the England of Chaucer nearly 300 years before the first English settlers came to America. In the 17th century, the sampler became a school exercise in addition to a repertory of stitches. The finished work was dated and signed with the name of the pupil and sometimes the teacher as well. The sampler also became a work of art, executed as an end in itself. Today most samplers are mostly cross stitched on even-weave fabric.

The textile masterpieces in this 20+ piece collection, demonstrate fine workmanship in needle techniques, materials and threads, fabric designs, and styles and patterns used for cross stitch. The eclectic subjects range from vacations and interests to those completed when Sue’s grandchildren were small and reflect their interests at that time.

One of the earliest pieces in the collection is the bowl of flowers done in crewel. Crewel uses yarn instead of floss to work the design. From crewel Sue moved to cross stitch which uses floss, usually two strands, to produce a more delicate design.

Most of her work was started after her retirement in 2008. You can find Sue cross stitching outside, inside, traveling by car or train. She finds cross stitching to be both relaxing and when the design begins to emerge, it becomes exciting.

Sue will often stitch daily and then will take a break for weeks or months. “While it takes a longer time to complete counted cross stitch, I feel the end results are worth investing hours, days, months, and even years to complete a project.”