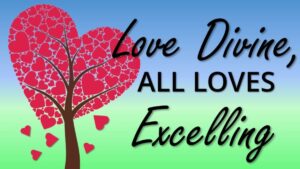 England’s first Poet Laureate (1668), John Dryden, died in the year 1700. His body of work, as the monarchy was being restored, was so influential that the period was known to many as the Age of Dryden. In act 5 of his semi-opera King Arthur, with music by Henry Purcell, published in 1691, Venus, the goddess of love, chooses the isle of Britain over her native Cyprus, as she sings:

Fairest Isle, all Isles Excelling,
Seat of Pleasures, and of Loves;
Venus here, will chuse her Dwelling,
And forsake her Cyprian Groves.

Even though Dryden had been dead for 7 years by the time Charles Wesley was born, his work would have been well known to the language scholar who spent 13 years at Westminster School and another 9 at Oxford before receiving his master’s degree. I suppose even a prolific poet like Charles Wesley needed to find inspiration from many sources to be able to write some 6,500 hymns during his lifetime (some claim he wrote almost 9,000!). We have 13 of Charles Wesley’s hymns in our Glory to God hymnal. On the Sunday closest to Valentine’s Day, I look forward to singing one of his hymns that has become one of our family’s favorite. It is not hard to see how Dryden’s text may have provided a starting point for what has become one of Wesley’s most beloved hymns, the first stanza of which reads:

Love divine, all loves excelling,
Joy of heaven to earth come down,
Fix in us thy humble dwelling,
All thy faithful mercies crown.

In this hymn, the trajectory of Divine Love is traced from the heavenly abode to this world and ultimately to every human heart. Join us this Sunday as we sing about the love that surpasses all others and may our Savior’s love inspire us to be more loving, humble, and faithful until the day we cast our crowns before our God, lost in wonder, love, and praise.