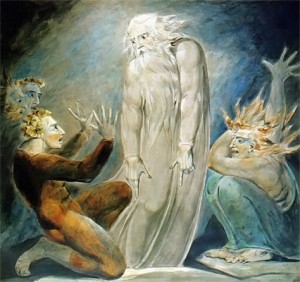 They’re a staple around Scout campfires, or on youth retreats. The night is far advanced, the moon’s dipped behind a cloud, the fire’s burning low. Around the glowing embers sits a circle of campers. They’re regarding each other’s firelit faces. Their backs are to the dark woods. Every once in a while a twig breaks, or the leaves rustle. It’s just the wind, isn’t it? Yes, the wind: that must be it.

A member of the group starts spinning a tale — a dark yarn of terror and dread. It’s not long before the fire-circle seems the only safe place to be. The darkness beyond has become a sinister place of dancing shadows.

Ghost stories aren’t confined to camping trips or slumber parties, of course. They’re a staple of great literature. Spirits of the dead appear in Homer’s Odyssey. Shakespeare uses ghosts extensively as characters in his tragedies. They’re a convenient dramatic device: a way of bringing another character up to speed on events that have taken place.

Not so many people are aware that the Bible contains a ghost story. It’s seldom read or taught: our Old Testament lesson this morning, the truly creepy tale of King Saul and the Medium of Endor.

The story is set in a time of conflict, when Saul and the upstart David are contending with each other for the throne. Complicating things is the fact that the Philistine army is threatening the very survival of God’s people.

David — slayer of Goliath, victorious general — is in the prime of his young life. Because of his victories, he’s become the darling of the people. Saul knows that, even as David’s star is rising, his own is slowly sinking into oblivion. The King has grown desperate. He’ll try anything to reverse his political fortunes — even dabbling in the black magic of those who claim to summon up spirits of the dead.

Which is how he happens pay a visit to the medium at Endor. She’s a mysterious woman known for her contacts with dark forces beyond human imagining.

Saul can’t travel to see her in his usual fashion, in all his royal glory, because of one very inconvenient fact. He’s issued a royal decree that activities such as summoning spirits are illegal. So, he goes to Endor in disguise. He breaks his own law.

The medium doesn’t know who this hooded figure is, at first — but once he explains whose spirit he’s looking to summon up, she knows. Saul is asking her to call upon the spirit of Samuel, the great prophet of Israel — the one who in happier times had anointed Saul as King.
Saul’s fantasy is to turn back the clock, to recover his glory days.

In the words of biblical scholar, Walter Brueggemann:

Saul belongs to the old order. He has no future, only a past. In that past (which has already destroyed him), Samuel had been decisive. Now Samuel is dead, but his power lingers demonically over Saul.

If he can just get Samuel to give him his blessing one more time, Saul’s certain that no power — not even the Philistines, nor the upstart David — will be able to cast him down from his throne.

It does not go as Saul expects. Samuel’s ghost responds angrily: “Why have you disturbed me by bringing me up?”

Up from where? Why, up from Sheol, the shadowy underworld where — in these early days of Israel — the spirits are said to take their eternal rest. Sheol is neither heaven nor hell, as we understand them from later writings in the Bible. Sheol is very similar to Hades, in Greek and Roman mythology: the gray country of the dead. In this early folktale, preserved in its original form, the outmoded idea lives on.

The ghost berates the King for disobeying the Lord, for trusting too much in his own devices. He declares that God has become the enemy of Saul.

Moreover, Samuel’s ghost informs Saul that the very next day, the King and his sons will be joining him in the spirit-world, for they and their soldiers are bound to fall before the advancing army of the Philistines.

His message delivered, the ghost falls back into the dark realm, and Saul simply comes undone. He knows his end, and he knows it is soon. The King collapses to the ground and just lies there, refusing to eat or drink, despite the encouragement of his fretful servants.

Finally, the medium herself convinces him to eat. She prepares for him a last meal: a feast fit for a king. She slays and roasts a fatted calf. She bakes fresh bread. Is this a kind deed for a King who had previously declared her an outlaw? Or, is it some ironic mocking of Saul for the hollow creature he has become? Who can say?

So, that’s the Bible’s ghost story: the spooky yarn of Saul and the Medium of Endor. Don’t take it to be a metaphysical description of the way things are — with its talk of Sheol (the underworld), and nary a hint of heaven. This is why the story is so seldom told. Its worldview doesn’t fit our own.

The Hebrew people, in this early time, have no understanding of the immortal soul — a spirit who inhabits a human body for as long as that body lives, then is set free to live, by the grace of God, in the spiritual realm of heaven. The division of the human being into two parts, body and spirit, is a Greek idea that comes along much later. When Samuel climbs up out of the earth for this brief visit to the land of the living, he arrives in his own body. “I see a divine being coming up out of the ground,” says the medium.

The Bible, though, is a collection of all manner of ancient literature, so it should come as no surprise that a folktale should slip in, here and there, as part of the mix. What interests me is the role that remembering plays in this ancient story.

What King Saul does — and what he asks the medium to help him do — is to re-member Samuel. I’m not speaking, here, of mere recollection — of casually sharing a memory or two of days gone by. Saul wants to re-member Samuel quite literally: the word “remember” being the opposite of dismember. Saul wants to bring him back, to violate the laws of life and death, to use a necromancer’s power to bring his mentor back to mortal existence, to bless him one last time. And he wants to do it for entirely selfish reasons.

There’s a sense of something profoundly wrong in this story, something unnatural — which is why it’s so creepy. Saul is trying to yank the past forward into the present, to resuscitate his young king’s dreams of righteous glory — dreams he’s long since buried under the weight of his own faithlessness. That Saul simply cannot do, not even with the help of a medium’s supernatural abilities. He cannot bring back the past.

Aren’t there times when you and I earnestly wish we could to just that? Very often, these are times when we’ve lost a loved one to death. In a season of grief, we desire to do nothing more than what Saul tried to do: to bring our loved one back, by wishing it to be so.

But that is not the ordinary order of things. The promise of new life in Christ — of reunion with departed loved ones — belongs not to the present, but to the future. Heaven will not come to earth until that day when — as the book of Revelation puts it — the New Jerusalem will come “down out of heaven from God, prepared as a bride adorned for her husband.” (Rev. 21:2). Until that day, the barrier that separates heaven from earth cannot be breached — except by the only one who has made that journey before: Jesus Christ, the risen Lord. He is not the medium, but the mediator.

Yet, there is a way we can still remember: in that fuller, richer sense for which our spirits long. We do so by means of a gracious gift from God: this table of hope, and the feast that is spread upon it. When Jesus said to his disciples long ago, as he broke the bread, “Do this, remembering me,” he’s offering to them the power to invite him into their midst. Theologians speak of the “real presence” of the risen Christ in this sacrament, and though they differ on the precise way this happens, Protestant, Catholic and Orthodox alike all believe he is spiritually here among us, as we break bread.

When we “do this, remembering him,” we call him back not out of the past, as Saul sought to do with Samuel, but — strange as this may sound — out of the future. In the sacrament of the Lord’s Supper, we remember the future.

As we seek the presence of the risen Lord in his role as host, it’s not that he’s come forward two millennia, from that cramped upper room off a dusty Jerusalem lane, to visit our own place and time. No, the one who presides at this feast is the risen and reigning Christ, the one who will one day, in the fullness of God’s time, come to dwell among us forever, welcoming the arrival of the New Jerusalem as though she were his bride.

Here, at this table, we have just a hint of that future promise. In the yeasty aroma of bread and the taste of sweet wine, we’re given but the briefest foretaste of a heavenly banquet far more fulfilling, far more satisfying, than any feast we can enjoy on this earth.

Here at this table, my friends, we feast on the future: God’s future promise of a world made new. It’s a world where there will be no need of remembering, for all that we now remember — and all whom we now remember — will be right here.

Let us pray:
Lord, we desire, above all things,
to be a people of memory.
But there are times when our memories fail,
when our imaginations are too impoverished,
our hope too frail.
Give us what we need to remember aright:
bread broken,
wine poured out,
divine love spread before us like a tablecloth,
gleaming white:
and your words resounding in the deepest part of our selves:
“Take, eat, this is my body, broken for you:
do this, remembering me.”
Amen.