“…we want you to excel also in this generous undertaking.”
2 Corinthians 8:7b

There I was, all set to preach a sermon on generosity. The intention was to neatly cap off our four-week stewardship campaign, “We Have a Story.” I was going to preach what I’d hoped would be a gentle, encouraging message on generosity as a Christian virtue. But then I heard the news reports out of Paris. Like many of you, I watched those newscasts in grim fascination, as the body count rose. All was confusion at first; but then, harrowing stories began to unfold, told by survivors.

Blood, explosions, broken glass, screams of pain, panic. One of the world’s great cities suddenly transformed into a war zone.

I was in Albany on Friday and Saturday, attending a meeting of presbytery leaders convened by our synod. During a break, late Friday afternoon, I watched some news reports on my hotel room’s TV. Then, at a reception Friday evening, I listened as the conversation turned to terrorism.

Some of the people were from the New York City area. One woman from North Jersey told how she used to work in the World Trade Center, but she’d left that job a few months before the planes flew into the towers. Did she lose any friends in the attacks, someone wanted to know? “Yes,” she whispered. “A lot,” as her eyes filled with tears.

Another spoke of the first World Trade Center attack, the bombing back in 1993. She worked in the building that was bombed. She’d gone into work early that day, and — after the attack — made the long descent down dark stairwells as the building was evacuated. She calculated that, if she’d come in at her usual time, she probably would have been in the parking garage as the bomb went off.

You never forget that kind of experience. Nor do any of us forget the ways those attacks traumatized a nation, even those who never got closer than the images on their TV screen. The memories are always there, lurking on the edges of the mind. An event like the Paris attacks suddenly brings it all back.

Not many of us had heard the words “post-traumatic stress disorder” back then — and if we had, we probably associated it with soldiers returned from the battlefield, suffering from the vague ailment described by that old euphemism, “shell shock.”

We, as a nation (and, indeed, as a world) are shell-shocked by this sort of thing. We have a collective case of PTSD when it comes to mass acts of terrorism. You and I coast along, putting such events out of our minds: until the latest bombs and bullets come screaming back — and with them, our fear. Which is what the terrorists want to happen.

It’s the polar opposite of the sermon topic I’d planned: generosity. Terrorism is anything but generous. Terrorists live not to give, but to take from their victims: their health, their peace of mind, their mobility, in some cases even their lives. There’s not a shred of kindness in the heart of a terrorist: only callous cruelty.

In casting around for what to say to you, in response to this latest bubbling-up of racial and religious hatred, I’ve decided to share the words of another Presbyterian minister: the late Fred Rogers, of MisterRogers Neighborhood on TV. Writing a newspaper column back in the 1980s, following one traumatic news story or another, he had this to say:

I was spared from any great disasters when I was little, but there was plenty of news of them in newspapers and on the radio, and there were graphic images of them in newsreels.

For me, as for all children, the world could have come to seem a scary place to live. But I felt secure with my parents, and they let me know that we were safely together whenever I showed concern about accounts of alarming events in the world.

There was something else my mother did that I’ve always remembered: “Always look for the helpers,” she’d tell me. “There’s always someone who is trying to help.” I did, and I came to see that the world is full of doctors and nurses, police and firemen, volunteers, neighbors and friends who are ready to jump in to help when things go wrong. 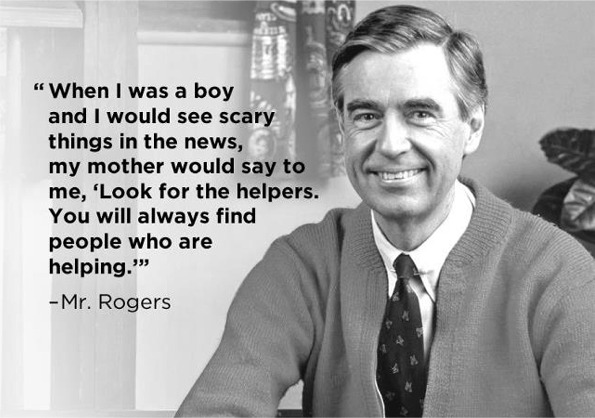 Not a bad piece of advice for us, as we think about the Paris attacks. It’s so easy to focus our attention on the men with assault rifles in their hands and explosive belts around their waists. That’s what they want — those merchants of death who trade in human blood and misery. They don’t want us to look for the helpers. They want us to have eyes only for themselves and their fellow killers.

It may be that one day our nation, and other nations who join us in war, will defeat the terrorists by force of arms. I certainly hope we will defeat them. But the realist in me says that, if we do, the victory will only be temporary. That’s because human sin is universal. Before long, some other killer will rise up to spill blood for some other desperate cause.

No, I think the only way to triumph ultimately over terrorism is to follow Fred Rogers’ advice: to keep on looking for the helpers.

One very small way you and I can join in this work is to strive, in our own lives, to become givers rather than takers. Generosity is a powerful force for good. A little bit here, a little bit there: before we know it, raindrops become a river. And what is generosity, after all, but love made manifest? Such a torrent is the only force that can scour from our common life the spilled blood of hatred.

In 2 Corinthians 8, Paul the apostle is writing about the generosity of certain Christians from Macedonia. They dug deep into their pockets, in response to Paul’s call to help the struggling church in Jerusalem survive:

“They — [the Macedonians] — voluntarily gave according to their means, and even beyond their means, begging us earnestly for the privilege of sharing in this ministry to the saints — and this, not merely as we expected; they gave themselves first to the Lord and, by the will of God, to us…”

Paul goes on to urge the Corinthians “to excel also in this generous undertaking.”

Think of that: he’s challenging them to pursue a particular sort of excellence: excellence in generosity.

That, of course, goes against the grain of our consumer culture. Excellence, according to our culture, has to do with accumulating wealth, not giving it away. It has to do with “looking out for number one” (and maybe “number two” as well, if by that we mean our families). That’s where generosity begins and ends, for a great many people in this world. They fancy themselves mighty generous if they give away something of what they’ve earned to those people closest to them.

What we do here, in the church, looks increasingly strange to those outside it — whose numbers are only growing, as the culture becomes more and more unchurched. The novelist Flannery O’Connor — thinking of her own Christian faith — paraphrased a famous saying of Jesus, from John 8:32: “You shall know the truth and the truth shall make you odd.”

“Odd” is the right word, when it comes to substantial, regular giving — giving in proportion to our income. This is more than a mere tip for God, here and there, but substantial giving, in order that the work of Christ may flourish.

The estimate-of-giving form you have in your bulletin — which we’re asking you fill out and place in the offering plate a little later, as it goes by — is a powerful vehicle for godly generosity. It’s also a very specific way of being a helper, in Fred Roger’s sense. “Look for the helpers,” his mother taught him.

Wouldn’t you like to be one of that company? When, by our giving, we build a strong church with a powerful witness, this church — along with many others around the world — speaks an alternate narrative to displace the narrative of cruelty that is the terrorists’ stock in trade.

It’s a central part of the work to which our savior calls us — the work of discipleship. Won’t you make it part of your work as well?

Let us pray:
Lord of all mercy,
take up the anger, take up the fear, take up the hatred
jammed into our hearts by acts of terrorism.
By your grace, make us better than that.
Make us, in the deepest sense, people of generosity,
after the example of him whose life was generosity itself,
Jesus our Lord, in whose name we pray. Amen.